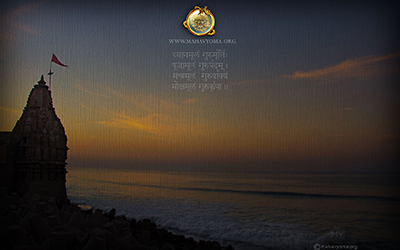 This is the temple of Samudra Narayan on shores of Gomati  Sangam Ghat, Dwaraka. This image was photographed  during sun rise.

Ithihas says that goddess Gomati invoked from celestial heavens to the earth by the holy Rishi Vasistha to sanctify Lord Rama after the battle with Ravana. And goddess Gomati manifested on ghats of this river and merged into Samudra Narayan temple after purification of Lord Rama. This temple is surrounded by Panchanada Tirtha, which comprises 5 wells that have sweet water. Nearby this temple we an visit Chakra Narayana temple.

There is a sacred kund in the temple, where several ceremonial sacrifices are performed. This temple is situated Manoratha Dwar (a meditation cave) where saints are seen in holy penance and meditation by the renunciation of all mundane desires.

You can download hi-res image of this wallpaper here

Some travel tips to reach Dwaraka, You can fly to Aahmedabad or Jam nagar from any major city  of India. From there you can take bus to Dwaraka from local tours and travels.

Why so many Gods?

Haindavam is not a religion, its a tradition.

Maha Vyoma themes  and personas for your browsers.